A rare book on coconut varieties and genetic resources 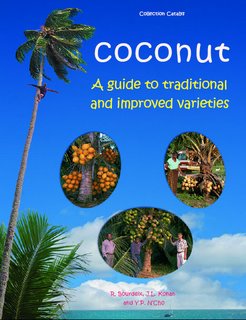 Coconut. A guide to traditional and improved varieties.
By R. Bourdeix, J.L. Konan and Y.P. N’Cho


Whether a symbol of the South Seas or a dream of tropical holidays, the coconut palm is first and foremost a plant grown, and also consumed, by millions of farmers and gardeners. In this book, 34 important coconut varieties from 18 different countries are each depicted with a plate of exquisite photographs and a one-page text describing their main uses and agronomic traits.
But this book is more than a simple catalogue of coconut varieties. It also explains the botany and history of the coconut palm, and describes the ethnology of those who cultivate it. Did you know, for instance, that before the Europeans arrived, Tahitian healers used a piece of coconut shell taken at a very precise stage of growth called "Nia" to repair skull fractures? that, little by little, the bone welded onto the fragment ? Did you know that the heart of the coconut palm has a flavour resembling fresh hazelnut and is eaten under the name of "millionaire's salad"? who other than a millionaire would be remiss enough to kill a coconut palm just for one meal ? Did you know that, as early as 1642, a edict issued by Governor General H. de Corcuera ordered each native of the Philippines to plant 200 coconut trees? Did you know that the water from fresh coconuts, which offers the advantage of being sterile, was also used in recent wartime to replace blood serum for transfusions? Did you know that, In human terms, coconut research calls for considerable patience, or even a degree of stoicism, because most of the field experiments last at least 12 years?
This book displays many other amazing anecdotes about this mythical palm. It is an indispensable reference for those who search having a general knowledge about agriculture and ethnology in the tropical coastal zones and islands. 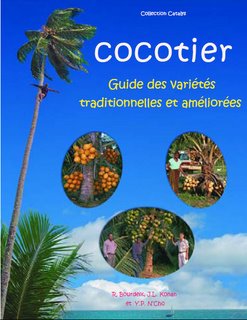 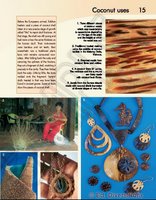 Coconut. A guide to traditional
and improved varieties.
By R. Bourdeix, J.L. Konan and Y.P. N’Cho

For millennia, man has tried to create and preserve coconut varieties that best suited his needs. This empirical work is far from easy. It requires monitoring over several years: Tall coconut palms often flower after five years, which is long enough to risk forgetting where the seednut came from. A coconut palm selected for its yield undergoes uncontrolled crossing with any of its neighbours; quite often, unless by a stroke of luck, the characteristics being sought are not found in the progeny. Despite these problems, this patient empirical work down through the centuries has led to the creation of several hundred varieties in Asia and the Pacific.
At the end of the nineteenth century, estates were set up with coconuts imported from a place renowned for its yields. In most cases, the seednuts were chosen for their appearance: some preferred large, heavy fruits, others fruits or medium size and somewhat spherical in shape. In brief, all acted according to their own personal and subjective convictions.
Scientific research on the coconut palm began around 1905, first in India, then in the Philippines, Fiji Islands, Sri Lanka and Indonesia. The first genetic work focused on improving Tall coconut varieties existing around the research stations. The first controlled pollinations were carried out in India. The agronomist H. Marechal, who crossed the Malayan Red Dwarf and the Niu Leka Dwarf in the Fiji Islands as early as 1926 is considered to be the father of the first coconut hybrids. The genetist J.S. Patel created the first Tall x Dwarf coconut hybrids in India in 1938. Although those hybrids were planted under poor conditions, they proved to produce earlier and better yields than their Tall parent.

Almost all research programmes were interrupted either by one of the world wars, or by the economic crisis of 1929. Most experimental stations were neglected and the pedigrees of the selected coconut palms were lost.
"Modern" coconut breeding only resumed after the Second World War, with the first surveys and systematic studying coconut varieties cultivated worldwide. This research provided an initial approach to the genetic diversity of the species. In particular, the originality of Dwarf type varieties was discovered: Dwarfs are characterized by early flowering, slow vertical growth, but also a tendency towards self-pollination, susceptibility to drought and insect attacks.
Many coconut hybrid tests were set up from 1945 to 1960. They consisted in crossing various local Dwarf or Tall varieties with each other. The experimental population used for that work was generally small. Most of the results indicated that hybrids were better than their parents.
For a long time, these studies remained mostly theoretical. Even though coconut hybrids displayed a high production potential, it was not known how to propagate them on a large scale. The absence of a reliable seednut production technique prevented any distribution of those hybrids to growers. Some countries even turned away from that line of research which did not seem to be leading to any practical applications. Development of seednut production techniques dates back to the 1970s. By offering reasonably priced seednuts with good legitimacy, those techniques led to the advent of coconut hybrids. For instance, the F1 hybrids Maypan and PB 121, were available for commercial planting in Jamaica and Côte d'Ivoire respectively by the mid-1970s, and seed gardens to produce these types of hybrid now exist in many coconut growing countries.
Around thirty institutes worldwide are contributing to coconut research. India and Sri Lanka have the longest continuing tradition of research on this palm. Starting in 1940, the French research institute for oils and oil crops (IRHO) set up research centres in West Africa (Ivory Coast, Benin) then in the Pacific (Vanuatu, French Polynesia). Ivory Coast and Vanuatu continue to play a very important role in coconut research. In the late 20th century significant coconut research was carried out in Florida, Jamaica and Trinidad in the Caribbean; Malaysia in Asia and the Solomon Islands in the Pacific, whilst the Philippines, Indonesia, Papua New Guinea, Thailand, Vietnam, Mexico, Brazil and China have continued to develope their own research facilities into the present century. On an international level, various organizations play a role in this field. The Food & Agriculture Organization and ODA (UK) once supported fundamental research into coconut pathology and in vitro propagation while CIRAD (France), GTZ (Germany), IPGRI, and ACIAR (Australia), still undertake or fund international research work on this palm. The Asian Pacific Coconut Community (APCC) publishes research findings and economic studies.
In Côte d'Ivoire, the "Marc Delorme" research station was founded in 1949 by the Institut de Recherches sur les Huiles et Oléagineux (IRHO) one of the research institutes now merged into CIRAD (Centre de coopération internationale en recherche agronomique pour le développement). Today, the station is part of a research facility belonging to the Ivorian "Centre National de Recherche Agronomique".